With the news on Rasa raising their Series B led by  Andreessen Horowitz announced today I wanted to provide more context on why what Rasa does – enabling developers to build the most user-friendly applications in the history of software and make them work for everyone – matters.

The internet has matured vs the signs of a new internet

There is a strong sentiment in our industry that the fundamental transformations technology has brought about over the last two decades have reached a peak. In this view, we aren’t seeing quantum leaps like mainframe to PC to smartphone anymore. We’re close to the upper bound of current tech growth with little room left to climb. There isn’t much more time or money people can spend online. The recent debate around John Luttig’s post is illustrative of this perspective.

the internet tailwinds that propelled meteoric growth in Silicon Valley are stalling. what next? zero-sum games between web startups, the operationalization of SV, new financial infra, VCs investing in visions over numbers, and R&D beyond the internet. https://t.co/Eufs87s5qS

I agree with many of John’s points, but this majority view underestimates the extent we already see signs of different new internets emerging – Rasa’s traction at this stage is just an example.

If one looks at Rasa from an enterprise automation perspective, then we see the future when we look at the success of visionaries of the autonomous organization such as about to IPO Lemonade.

If one looks at Rasa as a language company, then we can look at Rasa’s Level 3 AI conference from last week and the examples of Rasa clients who are working on shipping level 3 bots that by now go significantly beyond the simple chatbot experience many associate the industry with.

In A16Z’s Martin Casado words: “We’re now entering an era where software can interact with a human using natural language at levels of accuracy that dramatically change the usability of a system. The leading software project providing the engine to do that is Rasa.”

Open Source: From Community to Commercialization

In Alan’s words: “Conversational AI is hard, and it is a huge opportunity. We have the chance to build the most user-friendly applications in the history of software.”

There is also a question how this future may look like, the accessibility part of Rasa’s vision. As you can read Alex’ statements on TechCrunch, Rasa cares a lot about diversity and bringing on A16Z’ Cultural Leadership Fund is just another proof point. 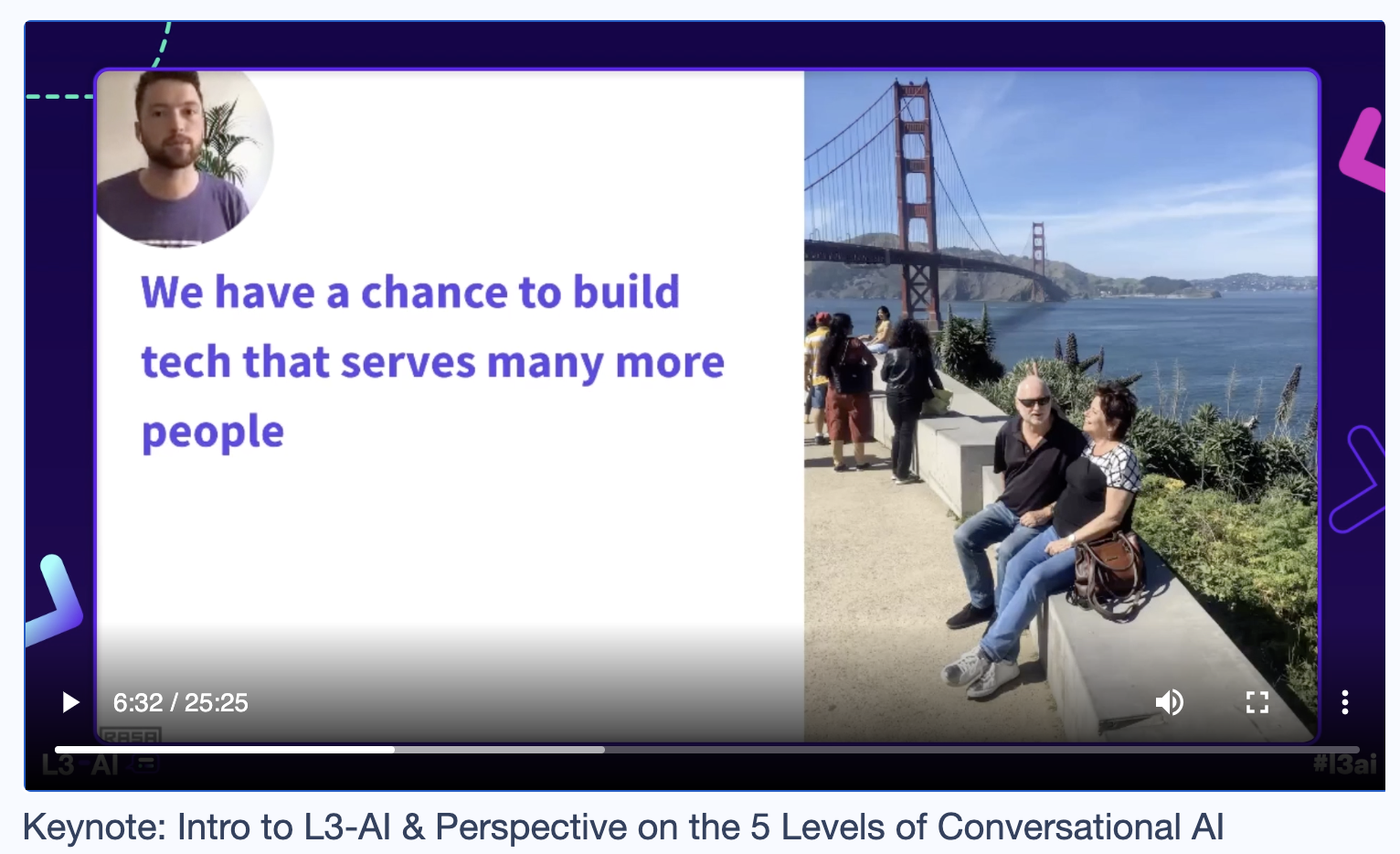 If you wonder how that looks today and may also look in future, then please read Alan’s post on the 5 levels of conversational AI. You can also view his related keynote from last week.

How to get to the next mountain – Open Source, Community, Applied Research

Alex shared Rasa’s plans on the next phase of Rasa’s product and community growth here.

In his keynote, Alan mentioned three key elements.
Building level 3 assistants is hard, and the folks at Rasa understand that they do not have all the answers. Open-source code makes a field progress 10x faster.

This approach attracted a global community of developers and other makers exchanging and building on each other’s ideas around Rasa. The bigger this community gets, the more help new users get and the faster new ideas such as Conversation-Driven Development propagate. 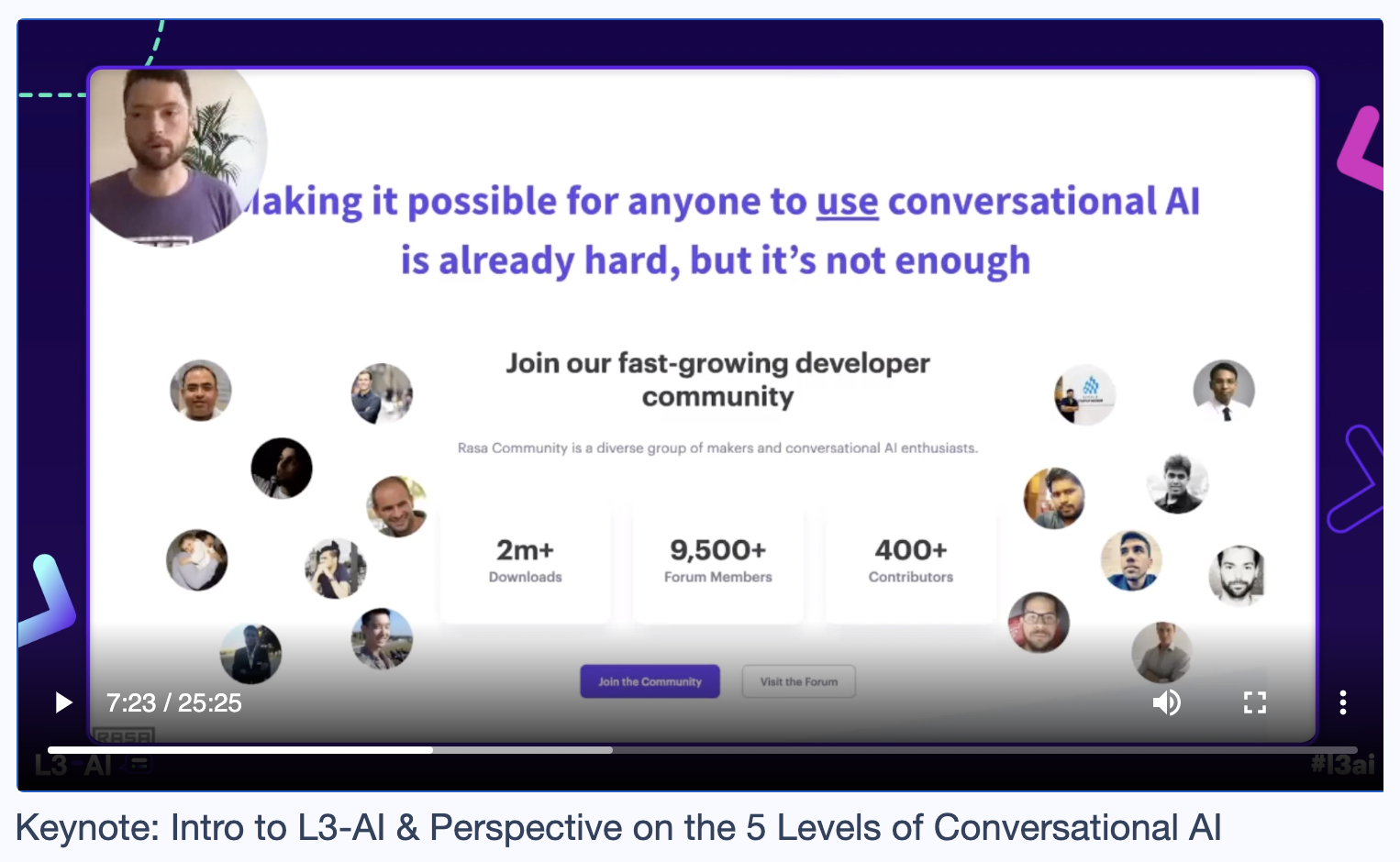 Even if you are not a developer, I suggest you check out some of the community work by the fantastic Rasa developer relations team. These days corporations run 100s of algorithms as part of their operations. It is becoming more important for workers to understand “black-box AI” and what’s going on inside the AI solution.

Whoa. Just watched an example of improving dialog using the TEDPolicy and a very intuitive explanation by @fishnets88 on how it all works including how it learns to generalize your stories. #l3ai #chatbot #tangent #dialog

Last, but not least, it is Rasa’s aspiration to be the best place in the world to do applied research in conversational AI with early output such as DIET. Rasa’s newly announced technology hub in Edinburgh led by Adam Lopez will help a lot.

I want to congratulate the whole team on this milestone and and am excited to see what they can achieve next.

The AI race to the top: Observations on research-driven teams